Everything about the thermostat of the car cooling system

The coolant thermostat is a small but important part that maintains engine temperature. A properly functioning thermostat does not require any attention, maintenance or any intervention in the work. But if it breaks down, the car will have to be delivered to the service station by a tow truck. It is a completely self-contained device that is usually remembered only in the event of a failure.

Purpose of the thermostat

There is a strictly defined operating temperature for the engine that provides optimal working conditions. Typically, this range is from 80 to 97 ° C, depending on the type of engine. At lower temperatures, sufficient fluidity of the engine oil is not ensured, which means that its resistance increases when the pistons move. Above – engine overheating, in which an abnormal expansion of finely fitted metal parts occurs, friction increases, and the surfaces of pistons, cylinders and valves are damaged.

The cooling system is designed to maintain an optimal temperature: when the car starts, it needs to warm up quickly, and then, while driving, you need high-quality cooling. The regulation of this process is taken over by the thermostat, which is installed at the “fork” between the large and small circle of the cooling system and controls the direction of the coolant flow.

Thus, the thermostat, in a completely autonomous mode, regulates the amount of antifreeze entering the cooling radiator in order to maintain the engine temperature at a constant operating level.

Intensive cooling: the bypass channel is completely closed, all the coolant flows through the radiator

Design and principle of operation

The thermostat consists of a cylinder filled with a material with a high coefficient of thermal expansion. The filler can be liquid (for bellows thermostats, a mixture of water and alcohol) or solid. The solid filler usually consists of distilled granular wax mixed with copper, aluminum and graphite powders.

The cylinder body is made of corrugated copper, which has good thermal conductivity. A hermetically sealed copper cylinder is filled with a heat-sensitive material (cold solid), in which a metal stem is mounted. The whole structure is sealed with a rubber seal.

On both sides of the cylinder there are two valves: the valves of the large and small circuits of the cooling system. The whole structure is fixed in a plate-body with upper and lower frames, and is equipped with springs that provide the required resistance to the stem.

When the heat-sensitive filler melts from the high temperature, it expands and pushes the stem outward (approximately 2 cm). The valve, mounted on the stem, rises and closes the pipe. The higher the coolant (coolant) temperature, the greater the push-out force of the rod. As it cools, the wax filler decreases in volume, and the stem together with the valve is returned to its place by means of a spring.

The principle of operation of all thermostats is approximately the same: what for European, what for American, Asian or domestic cars. But some design features and technical parameters differ to fully match the parameters of the engine and cooling system.

Depending on the temperature required for the engine to operate, an appropriate thermostat with a precisely calibrated temperature range will be used. As a rule, this indicator is written on the body, and in the description it is indicated as “melting point”.

Examples of designation of the operating temperature
on the thermostat housing

The hotter the climate, the “colder” the thermostat should be: in extreme heat conditions, the engine warms up quickly, and the radiator may not provide normal cooling of the antifreeze. Therefore, for “Africa”  thermostats with a low melting point are used, and for “Siberia” – with a high one.

Older cars used (and still use) single-valve thermostats: the simplest in design. Newer models are two-valve, which are used in almost all new cars.

In two-valve models, the upper and lower valve work synchronously: if one port is open, the other is closed.

Used in high pressure refrigeration systems where high fluid resistance is required. In such thermostats, the valve consists of two “plates”: first, the smaller one opens, for which less effort is needed, and then, when the pressure drops, the main one opens.

In most cases, the thermostat is sold without a housing: during installation, it is necessary to disassemble its location, remove the old one and install a new one. But some manufacturers offer thermostats already installed in the distribution housing, which during installation must be connected to the corresponding pipes of the cooling system.

On modern cars, thermostats can be equipped with an additional temperature sensor and heater, which are paired with an electronic control unit. At medium engine speeds, the coolant temperature is maintained at a higher level, and at maximum load, additional heating is turned on, and the thermostat is triggered earlier, which allows the antifreeze temperature to be reduced by about 10 ° C. This solution provides significant fuel savings.

For thermostats, the diameters of the small valve, the “poppet” and the heights are important. For body models, the dimensions of the nozzles, their length and angles of inclination are indicated.

In most cases, thermostats are sold with an antifreeze resistant special rubber gasket.

Since the device of the thermostat is quite simple and is not subject to intense mechanical stress, it can work for a long time. There may be several reasons for the breakdown: 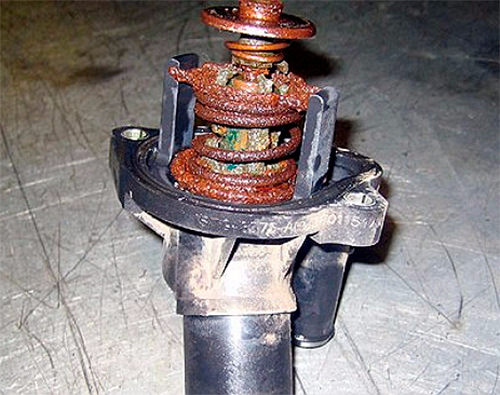 In the event of a breakdown, the thermostat begins to respond worse to temperature changes, and then it jams. The thermostat valves can close off the radiator or bypass connections, or they can stop in the middle position.

The most severe consequence of a thermostat failure will be engine overheating: in the heat, a few minutes are enough to bring the engine into an emergency state. But driving with an insufficiently warmed up engine affects its resource: wear of parts increases, engine oil works ineffectively.

How to check the thermostat?

1. Start the engine. Before it warms up to operating temperature, antifreeze should not enter the radiator. Therefore, the branch pipe leading to the radiator must be cold. If it is warm, antifreeze enters the radiator ahead of time.

3. If the engine is well warmed up (almost to the red zone), the antifreeze should not enter the bypass pipe, but all pass through the cooling radiator. Accordingly, the pipe to the radiator will be hot, and the bypass pipe will be cold.

At Cars Wanted Newcastle, we guarantee top cash for your car as we are specialized in buying all type of vehicle regardless of the make. Our price mainly depends on the make and model of your car through that information we make an offer. We provide our cash for cars service throughout Newcastle regions and still expanding to cover Sydney areas. Some companies only offer free removal of cars but at Cars Wanted Newcastle you get cash up to $8999 on the spot.